x1 year ago by ALGadmin

We are transitioning to a new website https://www.ucn-portal.org/. Archive and real-time images may experience some delays.

All data is available upon request. Please contact data@umbc.edu with any questions/concerns.

This Hazard Mapping Smoke and Fire Product image procured from GEOS-East and GOES-West satellite data shows heavy amounts of smoke in the Washington, Montana and Oregon regions (Figure 1).  According to INCIWEB, the Williams Flat Fire  west of Spokane is still active  with movement to the east/northeast.  It’s significant impact on the environment can be seen in the hazard map as the smoke stretches horizontally from east Washington.  Colville Tribes Emergency Services and  the Ferry County Sheriff’s Office have both issued Level 3 Evacuation Notification to residents.  This urges residents to “Leave Now”.  It is reported on INCIWEB that although homes are not in immediate danger, the main concern is that the fire will grow and block the only exit to the area.  The effects of the Devore Creek Fire can also be seen in Washington northwest of the Williams Flat Fire.   The HK Complex Fire is causing significant smoke levels in north-central Oregon.  Smoke from the Granite Gulch Fire can also be seen in Oregon’s northeast corner.  Details about these fires are readily found on INCIWEB.

A more general view of the satellite data shows heavy smoke over British Columbia caused by fires near the area.  Light to moderate smoke is also seen in various spots across Canada and Alaska (Figure 2).

Figure 3 and 4 below are satellite images from GOES-EAST itself.  Figure 3 is time stamped at 1431 UTC, while Figure 4 is time stamped at 1651 UTC.  Observe how the smoke from the William’s Flat Fire is spreading eastward over time.  The smoke is grayer than the white clouds and is inside the red circle.  Most noticeable is the movement of the smoke just east of Spokane.

Figure 5 below is an image from the VIIRS (NOAA-20) satellite which shows the smoke stretching from Alaska through British Columbia.  Once again the smoke is grayer than the white clouds and is inside the red circle.

GOES-WEST images from the Hazard Mapping System Fire and Smoke Product show heavy smoke concentrations in parts of Montana, northern Oregon, and northeast Washington State (Figure 1).  This is due to several wildfires in these areas reported by INCIWEB.  Particularly heavy smoke continues to emanate from the still active Williams Flat Fire in Washington State south of the Colville Reservation (Figure 2).  INCIWEB  reports that this is a 18,000 acre fire caused by a lightening storm on August 2, which incited burning inside of a Game Reserve.  The fire has proven difficult to contain due to the rough terrain and unstable weather conditions.  Only 25% of the perimeter has been contained and local authorities continue to tend to the situation (Figure 3).

A more general view of the hazard map actually indicates lower levels of smoke throughout the North American regions than as of late.  This is a positive development for the region which has recently been largely covered with light smoke from fire activity.

NOAA’s Hazard Mapping System Fire and Smoke Product reported a region of heavy density smoke observed over portions of Oregon, Washington, Idaho, Montana, Wyoming, and into North Dakota. The smoke was captured in the GOES-16 and GOES-17 retrievals. The GOES-16 “True Color” (Figure 1) image (courtesy NOAA’s AerosolWatch) from shows the locations and associated smoke plumes with the Williams Flats Fire in Keller, WA. This fire started August 2 after a band of early morning thunderstorms with lightning moved across the eastern portion of the Colville Indian Reservation, as reported by INCIWEB.

The AOD associated with this smoke ranged between 0.2-1 over his region (Figure 2: GOES-17 AOD Composite).

The smoke is impacting the local air quality as shown in the PM2.5 timeseries (Figure 3) from air quality monitoring stations in Spokane, WA (data source: AirNowtech.org). PM2.5 concentrations ranging between 18-128 up/m3 after 2:00 pm PDT (14:00 LST), and is the source of the Code Orange and Yellow AQI (Figure 4, Airnow animation) in the Pacific Northwest.

The rest of the nation experienced for most of the day Code Yellow (Moderate AQI), except locations in Northern Michigan and the Southwestern U.S.. Southwestern Ozone Code Orange (Unhealthy for Sensitive Groups) AQI levels were fueled by the excessive heat experienced today over the region.

Data from the CHM15k (Figure 1) and the UMBC Micro-Pulse Lidar (Figure 2) at UMBC both support the presence of aerosols in the boundary layer throughout the day.

GOES-16 image (Figure 3) shows below 0.5 levels of Aerosol Optical Depth (AOD) in the middle of the day over much of the Continental United States and southern Canada, particularly in the central region.  Clouds hindered a good AOD retrieval over Baltimore.

The EPA AIRNow Map shows Code Orange and Code Red for ozone levels in southern California for the day.  This may be associated with high temperatures experienced in the region. 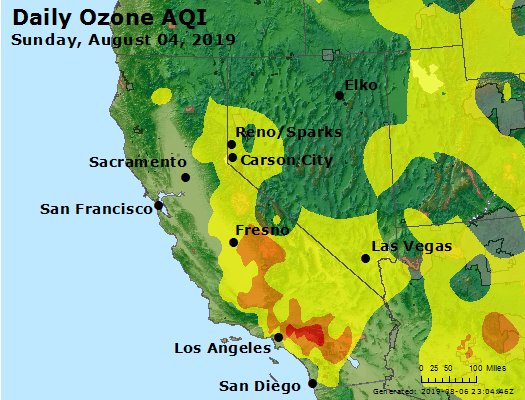 AIRNow also shows Code Red AQI levels due to particulate matter near Spokane, WA (Figure 3).  INCIWEB indicates these levels are due to the smoke produced by the ongoing Williams Flat fire near the Franklin D. Roosevelt Lake.  This fire began yesterday on August 2 and has produced large smoke plumes (Figure 4).

For the Baltimore region, the EPA AIRNow Air Quality Map shows Good (Code Green) air quality in the morning and nighttime (Figure 1).  In the middle of the day, Moderate (Code Yellow) AQI levels develop and recede.  Unhealthy (Code Red) and Unsafe for Sensitive Groups (Code Orange) ozone levels can be seen in both southern California and Arizona during midday (Figure 2).  All these circumstances illustrate how hot portions of the day can exacerbate ozone levels and create safety concerns.

Hazard Mapping System Fire and Smoke Product from NOAA reports the  continuing effects of Russian wildfires and Canadian smoke plumes on regions of Alaska, Canada, the Great lakes, and the North Atlantic.

The EPA AIRNow Air Quality Map shows a large area of Moderate (Code Yellow) and Unhealthy for Sensitive Groups (Code Orange) levels of particulate matter in the Montana region east of Missoula (Figure 1).  This is most likely due to several wildfires in the region that remain active.  The Beeskove Fire near Missoula (Figure 2) and the North Hills Fire near Helena (Figure 3) both began in late July and remain active through today.  Images are provided by INCIWEB.

The Hazard Mapping System Fire and Smoke Product uses GOES-WEST data to show moderate and heavy smoke concentrations in the Northwest Territories of Canada and the eastern areas of Alaska.  The heavy smoke near Alaska is attributed to large complex fires in its central and eastern regions.  Light smoke concentrations can also be seen from the edge of Russia all across Canada,  Greenland, northern regions of the CONUS, and parts of the Atlantic and Pacific oceans (Figure 4).

The Airnow animation above shows Moderate (Code Yellow) AQI levels along the Eastern US (Figure 1) as a surface high pressure system sets up over this region, and its associated light winds and high temperatures enhance ozone production. Code Yellow Ozone AQI levels were also reported in the Southwestern US, but Unhealthy (Code Red) AQI levels were experienced in locations along San Bernandino, CA (Figure 2).

NOAA’s Hazard Mapping System Fire and Smoke Product (Figure 3) reported the presence of smoke from several wildfires in Alaska blowing east into Canada as well as smoke from Canadian fires over Maine and extending into the Atlantic Ocean.

NOAA’s Hazard Mapping System Fire and Smoke Product continues to report smoke from wildfire activity throughout Alaska and Canada. The smoke continues to produce a large areas of varying density. This smoke covers an area extending from the easternmost portions of Russia into the Yukon and from the Brooks Range in northern Alaska to Juneau and northwestern British Columbia. The most dense smoke resides from over Anchorage into much of central and southwestern Yukon. The smoke (Figure 2) can be seen in the VIIRS true color image (Figure 2) over the Atlantic Ocean (gray plumes).

Significant wildfire activity can be observed along Alaska and Northwestern Canada with smoke spreading along Washington, Oregon, Idaho and northern California and Nevada. Smoke from Canadian wildfires in Manitoba and Ontario is widespread along the Great Lakes, Mid-Atlantic and Northeastern United States according to NOAA’s  Hazard Mapping System Fire and Smoke Product (Figure 1).

A thick plume of smoke, and its corresponding AOD retrieval, from the Canadian wildfires was observed this morning in today’s GOES-16 GeoColor and AOD Product over the Great Lakes, the Mid-Atlantic and Northeastern states  (Figure 2 and 3: NOAA STAR NESDIS Aerosol Watch Product from  12:41 UTC (8:41 EDT)).

This plume has not impacted the surface air quality monitors as shown in the lidar timeseries below from measurements at City College of New York (Figure 4), Howard University Beltsville Research Campus (Figure 5) and UMBC (Figure 6). The smoke was observed 2500-4000 meters and above the boundary layer. The boundary layer at 18:00 UTC (2:00 pm EDT) had a max height around 2000 meters. Real-time lidar timeseries for these sites are available under the Real Time Data tab (above), as well as images from past days under the Archived Data tab.